Get In My Belly

I love this picture! 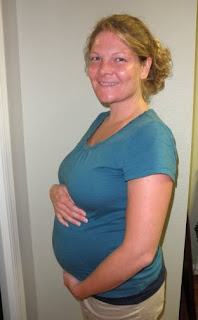 I love that JoanMarie's finally showing. And she loves it, too. She no longer has to deal with strangers glancing at her belly with "Is she or isn't she?" looks.

At the beach this weekend, I was reading aloud from a book about taking care of newborns, when JoanMarie raised the bottom of her shirt. Isaiah was stirring! I placed my hand on her tummy and, for the very first time, felt the movements of my son. I have no idea what my face looked like, but a squad of teenage girls on towels a few feet away touched their hearts, tilted their heads, and sighed. They looked so cheesy!

And speaking of bellies...

Now that I don't have to worry about fitting into my Cupid costume anymore, I decided to catch up on some food I've been meaning to try. You've all heard about that KFC Double Down, right?

I was so excited to finally dig into one of those! Unfortunately, the KFCs around here don't carry them.

But since we were there, I enjoyed my first fried chicken in several years, and it was gooooooooood. 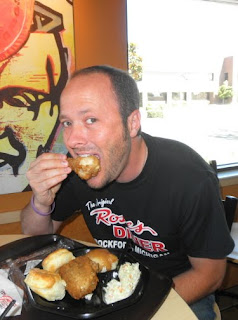 And yes, since I don't have any upcoming author visits for a while, I'm also letting my facial hair grow. In a month or so, I'm hoping to look like Zach Galifianakis.

Louise has been on vacation so I've been growing my beard. Shhh! Don't tell her :)

I'll be up that way in a few days. You got Double Downs near you???

Dude, you are STILL talking about that damn chicken sandwich?

I'm a sucker for marketing, and now I will think about it until I try one.

Do they have them up near you???

Hmmm, I'm not sure if we have them in Michigan or not. If we do, can I offer that as payment to come speak at my library? ;)

shakes first at you