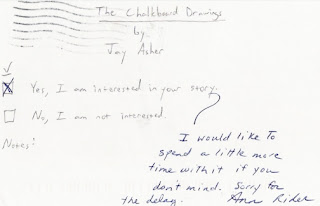 But each year that passed, if you want to put a silver lining on it (and I do), gave me more and more fodder for next weekend’s speech!
Posted by Jay Asher at 6:35 PM

Good luck with your speech Jay, I wish I could be there to listen to you.

And it's so random but are you working on any stories? I can't get enough of Th1rteen R3aasons Why, seriously!

As a newer barely published writer (my work has been in one small circ. magazine so far), I wish I could be there to hear your talk. The road to publication and the road to better writing are learning experiences. Every scrap of encouragement counts. I love that you kept that postcard and congratulations on your book! Best of luck at SCBWI N.Y.

Wish I was there to hear your speech! I'm hoping you'll be in LA with Eve and Robin (maybe giving another workshop?)

I have to miss the conference this year, but good luck. I know you'll do great! Just wear one of your gala costumes and you'll be the talk of the town.

Okay, so now I'm really excited because I WILL be there to hear your speech next week.

I'm a newbie to the SCBWI, and I originally picked up Thirteen Reasons Why because I saw your name on the speaker list.

Needless to say, I bought it, loved it, and read it non-stop through the night (which, in retrospect, was the perfect thing to do.)

So, I for one am very much looking forward to your talk.

And I also wish I was gonna be there to hear you speak. But I must say I'm thrilled that you're talking on the big stage, my friend. Couldn't happen to a nicer guy....

Good luck with your speech, Jay! Any chance you'll be posting it online after the conference? I'd love to read it.

Sarah, I'm hoping the speech goes well, in which case I'd love to get invited to present it at other conferences. So for now, I'll probably just post bits-n-pieces on this blog.

But if the speech bombs? Sure, I'll post the whole thing!!!

Thanks for the good wishes, everyone!

Looking forward to hearing your speech. I'll be there!

I'll be there! It's my very first conference. I'm excited that you will be there too.

I look forward to hearing the speech Jay. Booked a trip there just a couple weeks ago. Maybe I'll see you there.
Bill (from lunch at SCBWI LA)...

I will be there so I can't wait to hear it in person :) Will you be signing books while you're there?

Okay, here's the plan. All of you who read my blog and will also be at the speech, pay close attention and if you can tell I'm going for a laugh, and yet no one's laughing...laugh!!! Even when something's not funny, if a few people laugh, other people will join in.

That'll help a lot. Thanks! (I just found out a few editors from Razorbill will be there, so I'm freaking out a little bit right now.)

That's awesome, Jay. I'm sure you'll be great!
Know that you've got a big cheering squad in this virtual world thingy, too!
Namaste,
Lee

So . . . as everyone who heard Jay today knows, he ROCKED. Not just that, he inspired 1055 children's book writers and illustrators, who laughed, sighed, took notes and clapped wildly at his inspirational story. "Never give up!" he told us. And then he offered to present the first Stubborn Children's Book Writers & Illustrators Award -- a trophy! -- to the one of us who had worked the longest to get our book published. I hesitated putting my hand up until my seat-mate, who had heard me tell my group yesterday that I had started my novel 40 years ago, told me I should. I am THRILLED to be the recipient of Jay's generous, kind, thoughtful and inspirational award. I have admired his work from the sidelines and hope to follow his footsteps. I feel I am on my way. Many thanks!

Jay, you were awesome! I tried laughing at the appropriate moments, but you didn't even need it. I feel like Pat the Beaver was possibly my favorite and am really itching to see the rest of it. What does that say about me and my taste? :) Anyway, just wanted to say it was awesome and accomplished what you wanted because I was inspired :)