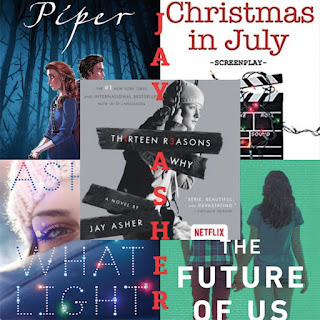 Amanda Fox is determined to never date anyone in showbiz again. The former star of a high school drama, she now focuses on life as a single mom, acting in a few commercials and one television Christmas romance per year. Cole Buskin is a country music star tackling his first acting gig, a television Christmas romance. And Cole wants his high school celebrity crush — Amanda — to co-star with him.When these two stars cross, the attraction doesn’t stop just because the director yells, “Cut!”

Written in the format of a TV script.

#1 New York Times bestselling author Jay Asher and co-author Jessica Freeburg brilliantly reimagine the classic Pied Piper legend as a powerful graphic novel about loneliness, love, and vengeance.
Long ago, in a small village in the middle of a deep, dark forest, there lived a lonely, deaf girl named Maggie. Shunned by her village because of her disability, her only comfort comes from her vivid imagination. Maggie has a gift for inventing stories and dreams of one day finding her fairy-tale love.
When Maggie meets the mysterious Piper, it seems that all her wishes are coming true. Spellbound, Maggie falls hard for him and plunges headfirst into his magical world. But as she grows closer to the Piper, Maggie discovers that he has a dark side.
The boy of Maggie’s dreams might just turn out to be her worst nightmare…
With striking illustrations from Eisner-nominated artist Jeff Stokely, mixed with Jessica Freeburg's work on historic and legendary horrors, Piper is an exciting new departure for Jay Asher that deftly touches on the same themes of truth, guilt, and redemption that made Thirteen Reasons Why a beloved bestseller.

From Jay Asher, #1 New York Times bestselling author of Thirteen Reasons Why, comes a romance that will break your heart, but soon have you believing again . . .

Sierra’s family runs a Christmas tree farm in Oregon—it’s a bucolic setting for a girl to grow up in, except that every year, they pack up and move to California to set up their Christmas tree lot for the season. So Sierra lives two lives: her life in Oregon and her life at Christmas. And leaving one always means missing the other.

Until this particular Christmas, when Sierra meets Caleb, and one life eclipses the other.

By reputation, Caleb is not your perfect guy: years ago, he made an enormous mistake and has been paying for it ever since. But Sierra sees beyond Caleb’s past and becomes determined to help him find forgiveness and, maybe, redemption. As disapproval, misconceptions, and suspicions swirl around them, Caleb and Sierra discover the one thing that transcends all else: true love.

What Light is a love story that’s moving and life-affirming and completely unforgettable.


The Future of Us
Co-written with: Carolyn Mackler
Release date: November 21, 2011

What if you could see how your life would unfold–just by clicking a button?

It’s 1996, and less than half of all American high school students have ever used the Internet. Emma just got her first computer and an America Online CD-ROM. Josh is her best friend. They power up and log on–and discover themselves on Facebook, fifteen years in the future. Everybody wonders what their destiny will be. Josh and Emma are about to find out.

Clay Jensen returns home from school to find a strange package with his name on it lying on his porch. Inside he discovers several cassette tapes recorded by Hannah Baker–his classmate and crush–who committed suicide two weeks earlier. Hannah’s voice explains that there are thirteen reasons she decided to end her life. Clay is one of them. If he listens, he’ll find out why.

Clay spends the night crisscrossing his town with Hannah as his guide. He becomes a first-hand witness to Hannah’s pain, and learns the truth about himself–a truth he never wanted to face.

Netflix info on IMDb: 13 Reasons Why (TV series)
Website for the book: thirteenreasonswhy.com