The past few days, I've been at the Vegas Valley Book Festival. I know most of the following pictures look like I was running around Vegas having a lot of fun. And yes, that is absolutely correct. But I was also there to work.

My first night in town, I attended the opening keynote by Max Brooks. He's the author of World War Z and is extremely funny. The entire time he spoke, I kept thinking, this guy should be a comedian. It wasn't until I got back to my hotel and did my research that I found out Max is the son of Mel Brooks. 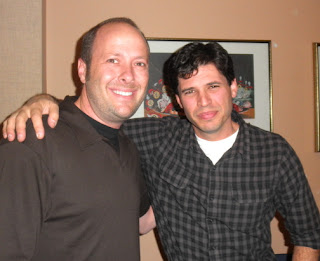 Then I checked into my hotel, which had a shark tank!

Obviously, there are more than just card sharks in Vegas. (HA! HA! HA! HA! *ahem*) And that tube running down the middle? It's part of the waterslide! I so wanted to go down the slide, but like I said, I was there to work.

Of course, right outside my hotel was Fremont Street, which had some really cool coverbands playing. This one, called Arena, played the best hard rock songs from the 80s. Pour Some Sugar On Me. Bad Medicine. Runnin' With the Devil. Awesome! 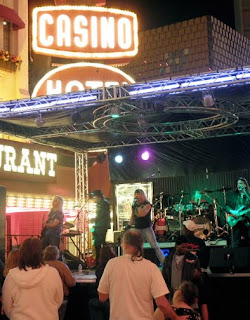 And then there was an 80s pop coverband. Great songs and cheesy dancing! 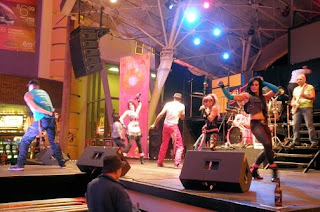 And yes, I also worked. I spoke at two high schools. First, I spoke in an auditorium at Chaparral High School with a few hundred students, then a smaller room at Rancho High School where almost everyone in the room had read my book. Both visits were very fun...but they're still considered work!

That night, a flock/herd/pack of YA authors who were speaking at the festival were given complimentary tickets to see Blue Man Group. If you've never seen them, it is such an energetic, hilarious, insanely weird show (including Twinkie spewage)! 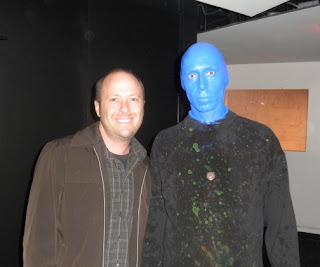 Here's a long-shot of Fremont Street later that evening. See those people hanging on wires? They're actually sailing overhead on ziplines. And yes, I did rock that zipline! Okay, back to work. Saturday moring, I walked down to the festival hub, where I spoke on two YA panels. But first, I chatted with the amazing people representing the It Gets Better Project. I purchased a shirt from Ross and Stephanie, and then they threw in a smaller shirt for Isaiah. 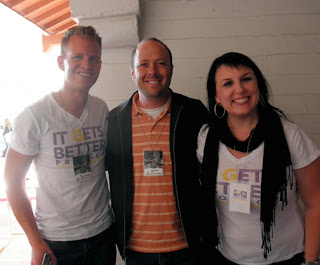 On the first panel, we discussed writing realistic fiction for teens. From left to right are moderator Lindsey Leavitt, Emily Wing Smith, Daisy Whitney, Lisa Schroeder, Liz Gallagher, and me. 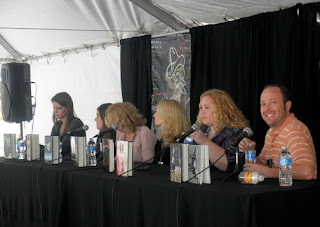 The second panel discussed fiction that included a paranormal twist. Since The Future of Us fits nicely into this category, I got to speak again! But I jumped off the stage near the end of the panel to take this photo of Crystal Perkins (who coordinated the YA author events), moderator Daisey Whitney, Cat Patrick, Suzanne Young, Lindsey Leavitt, and Heather Davis. 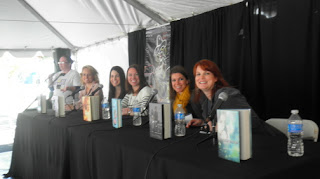 There were even more great authors at this event that I had the opportunity to hang out with, but I'm going to have to end the post here. Las Vegas wore me out. So now I'm going to get some shut-eye in the airport. Since I missed my connection due to weather, this place is my new hotel.

And while I am tired, if they had a waterslide that went through a shark tank, I would definitely ride it before bed!
Posted by Jay Asher at 1:00 AM

Wow...FUN! Thanks for sharing, and love the pictures too :)

Sounds like fun, but I'll bet you're happy to be home with your little guy!

And I'd be fine if I never saw twinkie spewage again, although I would definitely recommend the Blue Man Group!

I went to Las Vegas too... it was fun and I also got to see Freemont avenue