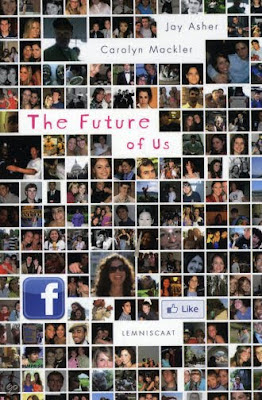 It's that time of year again! I recently flipped through the Fall 2012 Children’s Books issue of Publishers Weekly, and now it's time to let you know which books most piqued my curiosity.

Yes, the issue has been out for a while, but I so love these previews, I like to wait until I can take my time perusing them (much like I used to peruse the Sears toy catalogue at Christmas time).

Based on the brief descriptions available, here are the recently released or soon-to-be released teen and mid-grade novels that most caught my eye:

Blood Wounds by Susan Beth Pfeffer. After Willa’s estranged father goes on a killing spree, she and her mother are horrified to learn he’s headed their way.


The Boy Recession by Flynn Meaney. In this novel told from dual perspectives, a high school suddenly experiences a dramatic decrease in male students.


The Cloak Society by Jeramey Kraatz launches a trilogy about an aspiring super-villain.


The Curiosities: A Collection of Stories by Brenna Yovanoff, Tessa Gratton, and Maggie Stiefvater collects stories the authors posted online, plus their comments and critiques.


Dark Lord: The Early Years by Jamie Thomson. The most evil force in the universe is transformed into a 12-year-old boy.


Every Day by David Levithan. Each morning, “A” wakes up in a different person’s body.


For What It’s Worth by Janet Tashjian. In 1971, a music buff gets Ouija board messages from deceased musicians.


The Hallowed Ones by Laura Bickle. Does an Amish teen endanger her community by letting an injured stranger into it?


Have a Nice Day by Julie Halpern reveals what happens when Anna returns home after a stay in a mental hospital.


Kiss & Make Up by Katie Anderson introduces a girl who can read the mind of anyone who kisses her.


The Lost Treasure of Tuckernuck by Emily Fairlie. In a scavenger hunt, two sixth graders solve their school’s 80-year-old mystery.


Lucid by Adrienne Stoltz and Ron Bass. Two girls from different backgrounds dream themselves into each other’s lives.


Mangaman by Barry Lyga, illus. by Colleen Doran. Ryoko, a manga character, falls into the real world—and in love with a high-school girl.


My Beautiful Failure by Janet Ruth. A boy volunteering at a suicide hotline falls for a troubled caller.


Not Exactly a Love Story by Audrey Couloumbis. After moving to a new town, Vinnie gets to know a girl under two different identities—one on the phone, one in person.


Only Ever Always by Penni Russon. A music box connects two teenage girls who are from different realities.


The Secret Prophecy by Herbie Brennan. An international crisis erupts after a boy uncovers the key to a deadly prediction by Nostradamus.


Timekeeper by Alexandra Monir. The boy Michele fell in love with during her time travels enrolls in her school.


Time Between Us by Tamara Ireland Stone is a debut novel of romance in which a girl in the 1990s meets a boy who has journeyed back from the present day.


What Came from the Stars by Gary D. Schmidt. A planet besieged by a dark lord sends a gift across the cosmos—and into a sixth grader’s lunchbox.


The Wrap-Up List by Steven Arntson. When a letter foretells a teen’s death, she must complete her “wrap-up list” before her life ends.
Posted by Jay Asher at 8:33 AM 4 comments:

﻿
Outside the U.S., Thirteen Reasons Why has sold more copies in Germany than any other country. There, it's called Tote Mädchen Lügen Nicht, or Dead Girls Don't Lie. It's been a bestseller there, and was nominated for their big national teen book award. Dang that Tödliche Spiele! (Which you may know as The Hunger Games.)
So when I was asked to speak at a literature festival in Hamburg, of course I said "Yes! Yes" And to make sure they understood, I added, "Ja! Ja!"
But I wasn't going to hop on a 1-hour flight, followed by a 10-hour flight, followed by a 1-hour flight, for one day of speaking. So my publisher set up some cool events in some other cool cities with a couple of cool speakers to help me out.
First up was the Schlosspark Theater in Berlin, where 520 pupils (which, apparently, is different than students) came from nearby schools. No, pupils in Germany aren't camera-shy. I took this photo while a someone was asking a question from the back of the room. 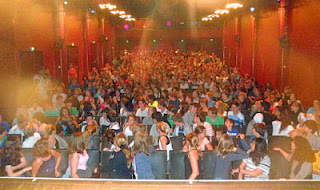 After that presentation, I signed copies of both Tote Mädchen Lügen Nicht and Wir Beide, Iirgendwann. My German publisher loves changing the titles of my books. There, the translated title of The Future of Us means something along the lines of Both of Us, Someday. 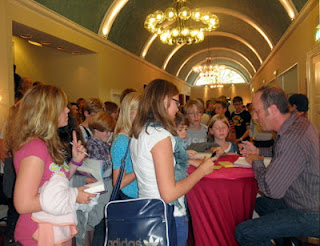 After a taxi tour of the up-and-down history of Berlin, we caught a train and headed for Rostock. 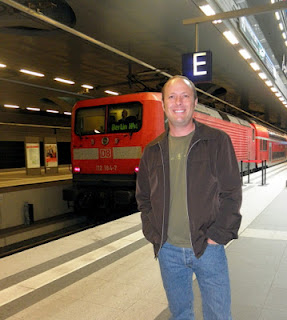 Here are my travel mates, Judith Hoersch, Marc Langebeck, and Katharina Göring. Judith,  a singer and actress, is the voice of Emma in the audiobook of Wir Beide, Irgendwann. Marc, the host of a children's literature TV show, interviewed me at each stop. He also did a wonderful job of translating what I said for the audience, and translating their questions for me. And Katharina works with publicity at my German publishing house. 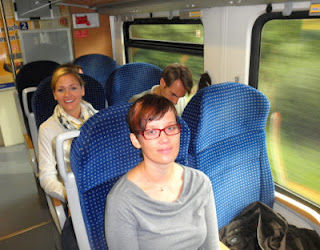 Before speaking in Rostock, I had the chance to visit Marienkirche (St. Mary's Church). It was beautiful inside, with a huge pipe organ. 5,700 pipes! 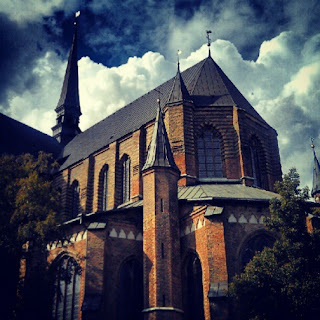 That night, we spoke at a bookstore chain called Thalia. It was at this stop, while reading to the audience, my eyes went crazy and the words turned to smudges. And that meant, when I got back to the States, it was time to see the eye doctor. No more excuses! 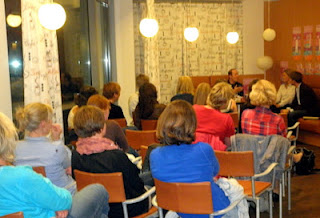 Thankfully, I had my e-reader with me, so during our next stop at Thalia in Stade, I was able to adjust the font and make it huge so I could read the words. 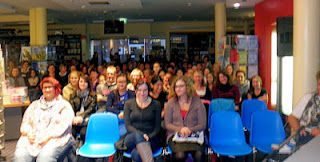 Here's Judith beginning to read one of the chapters. (Notice that she's smart enough to know she needs glasses.)
To back up the chronology a bit, when we had lunch in Berlin, our driver ordered wiener schnitzel. When he ordered it, he asked if I knew what it was. I told him that I did, because we have a fast food chain in the States called Wienerschnitzel. But what the waitress brought out looked nothing like what a hot dog!
(That's the last time I trust a fast food chain to teach me about foreign cuisine.)
So for two of my following meals, I ate actual wiener schnitzel. It was good! But I did get made fun of for smearing my cranberry sauce all over the top. I guess you're supposed to dip it.
Dip it? We don't dip in America. We smear! 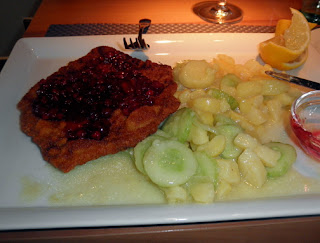 Finally, in Hamburg, we arrived at the Harbour Front Literature Festival. 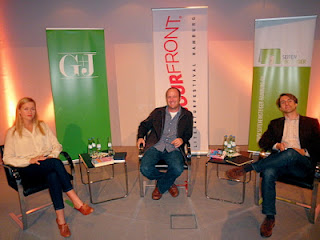 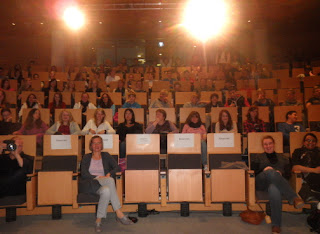 Then I had a photoshoot with Gunter Glücklich. He was very fun to speak with between (and sometimes, during) shots. I can't wait to see what how the photos turn out! 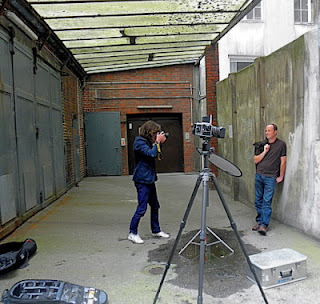 By this time, Katharina left, and Verena Otto took over for the publisher. Unfortunately, I didn't get any photos with Verena. But she was kind enough to take this shot at Friedrich Ebert Gymnasium (High School). 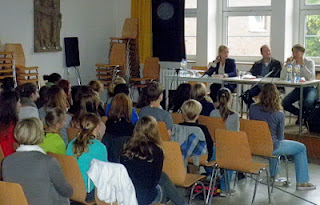 This school is a famous place in the history of music. It's where the Beatles first recorded, as the backing band for Tony Sheridan. 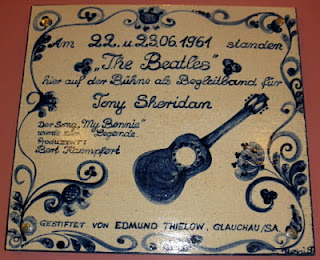 And this is the stage where it happened! 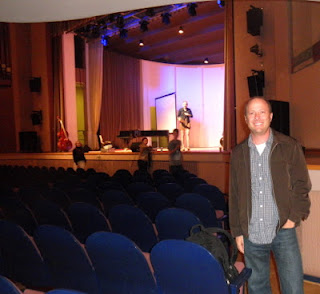 With my authorly duties over, I spent a day in Hamburg doing my touristy duties. My favorite stop was Miniatur Wonderland (which translates, roughly, to Miniature Wonderland). They had an amazing special exhibit showing the history of Berlin, recreating one intersection over several decades. The scenes show the rebuilding of Berlin after World War II, various stages of the Berlin Wall, and the celebration as the wall came down. Below is a close-up of the destruction during World War II. 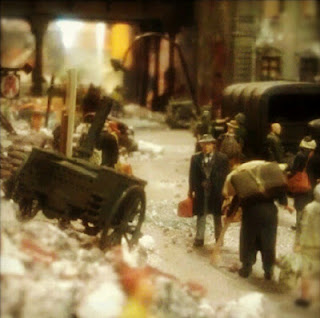 Here's a shot of a miniature music festival, including the ever-present outhouses. 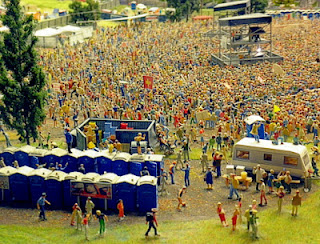 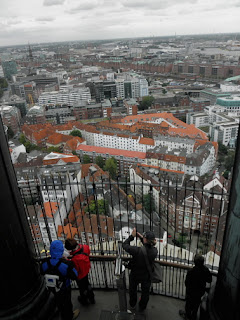 That evening, there was live music in various locations around Hamburg, including St. Michaelis. Beneath the church, in the crypt, they served coffee and waffles. And who am I to say no to that German hospitality?

The next morning, I took the long journey back home. I watched a couple in-flight movies. I took a few naps. I read from a few books.

And when I got home, I read a few more books to Isaiah before bedtime. 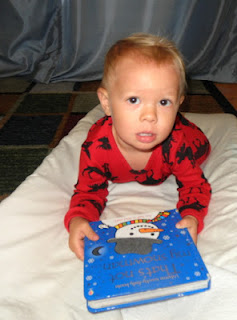 (Thankfully, the letters in his books didn't need adjusting for my eyes.)
Posted by Jay Asher at 10:52 AM 5 comments: 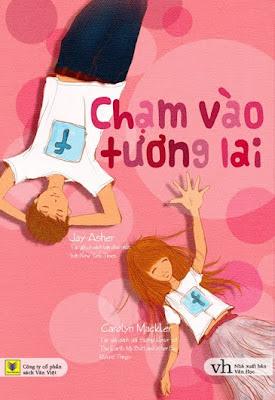 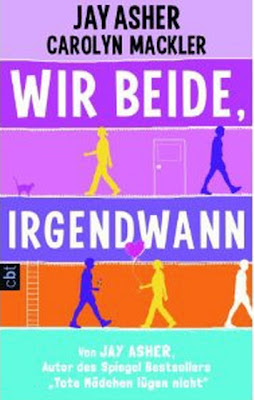 (Check out the publisher's book page,
with trailer, interivew, FB page, etc... here)
Posted by Jay Asher at 9:49 AM 1 comment:

The Big Bang in Bristol

On Thursday evening, I spoke at a library in Bristol, Virginia. ﻿But earlier that day, to help promote my appearance, I was interviewed on two of their daytime local news shows.
You can see me on Daytime Tri-Cities at WJHL here. 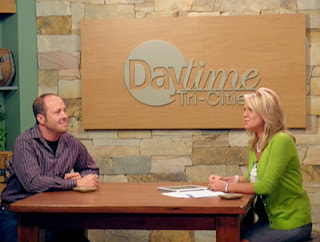 Then I headed over to The Noon Show at WCYB. 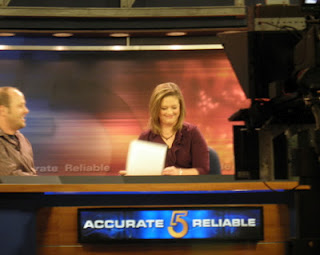 After lunch, I was given a tour of Bristol and told about it's remarkable history. If you know me, you know that I'm not a huge country music fan. (If you don't know me, now you know!) But I do appreciate it, and I'm fascinated by the origins of different musical styles. And that made Bristol a wonderful place to check out. As it reads on the back of a book I purchased, The Bristol Sessions: Writings About the Big Bang of Country Music:

In the summer of 1927, nineteen "hillbilly" bands gathered for a recording session in Bristol, on the Tennessee-Virginia border, including what would become some of the most influential names in American music -- the Carter Family, Jimmie Rodgers, Ernest Stoneman, and more. Organized by Ralph Peer for Victor records, the Bristol sessions were a key moment in country music's evolution. The musicians played a variety of styles largely endemic to the Appalachian region. Rather than traditional sounds, however, Peer sought a combination of musical elements, an amalgam that would form the backbone of modern country music. The reverberations of the Bristol sessions are still felt today. 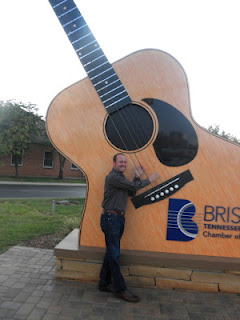 But I wasn't in Bristol to tour the town and buy books and c.d. compilations of the Bristol sessions. I was in Bristol to speak as part of their 2012 Discovery Series. 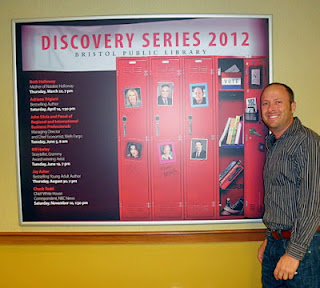 Almost everyone who came to my presentation had run one of my books. Many had read both! And that always makes for a very fun event with very insightful questions. 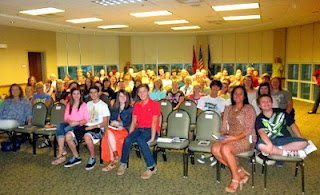 While I'm already booked for September this year, Bristol has a great music-filled weekend called Rhythm & Roots Reunion. My family may be looking to come back in 2013 for their 13th annual festival. Yes, I know I said I'm not a country music fan, but that Bristol Sessions book is making me appreciate it even more. And people can change, y'all!
Posted by Jay Asher at 12:46 AM 1 comment: