Back to the Birthplace of 13RW

My family recently returned from a week's vacation in Wyoming. Why Wyoming? (No, that isn't one of their rejected state mottos.) For one, it's absolutely beautiful. For another, we lived there ten years ago for six months. Ten years is a long time to wait to see your good friends again. Those friends have all had children since we lived there, and our li'l one couldn't wait to meet his new friends! 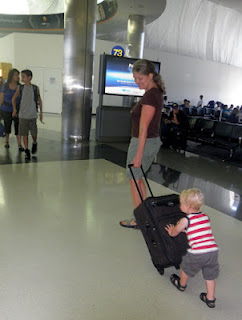 Instead of flying straight to what we still consider our second home, we spent a few days in Jackson Hole, Wyoming. Ten years ago, when JoanMarie and I drove from Cali to Wyo, we could only spend a few hours in Jackson Hole. And it was great to spend more time there.

In the middle of downtown is a park, and at each corner is a huge arch created with elk antlers. Thankfully, and I hope this is true, the antlers were shed naturally and then collected from the nearby Elk Refuge. 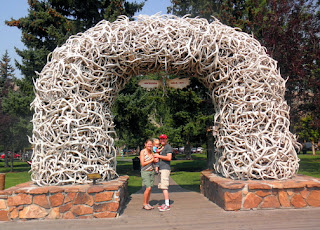 I'm sure Isaiah would love a stroller pulled by horses, but his ride is probably a lot more comfy than a stagecoach. 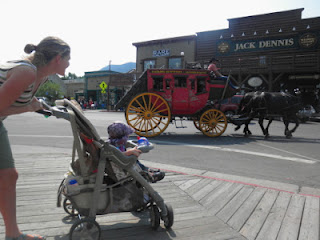 Don't worry, no bison were harmed to keep Izzy's head warm. (I can't say the same for the bison heads hanging in hotels and restaurants around town.) 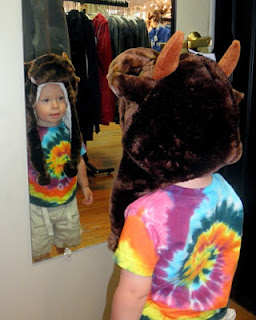 We spent many hours in and around Grand Teton National Park. We rode a tram over 4,100 feet up to the top of Rendezvous Mountain. Waiting for us was a lot of wind, beautiful scenery, and a restaurant that served waffles. Mine had melted butter and brown sugar! 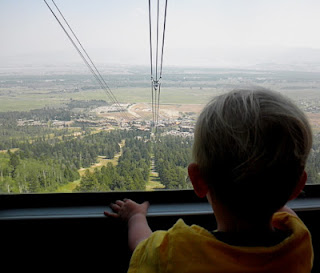 We wanted to take a horseback ride, but when we tried sitting Isaiah on a saddle, he repeated, "All done! All done!" It's been twenty years since I last rode a horse, and it wasn't the best experience, so I was feeling a bit All Done! All Done! before Isaiah let me off the hook. 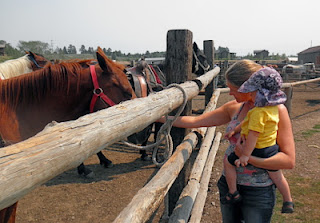 He also took his first bicycle ride, which he absolutely loved.


We rode six miles toward a market to grab sandwiches and ice cream. When we left the market, we bumped into Josh Holloway (Sawyer from Lost). I do consider myself 100% hetero, but when he flashed that dimple... 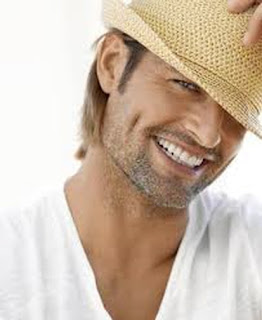 I'm sorry, but you would've giggled, too!

Then we spent some time in a little place called... 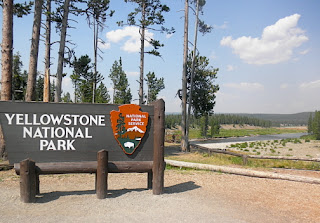 And I do wish the National Park Service would change a certain word on some of their signs. (Or is the common definition of that word really a problem?) 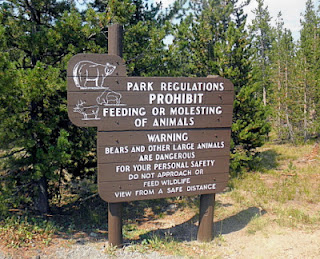 Isaiah the Daredevil loved balancing on a log in the water (as long as Daddy didn't let go). 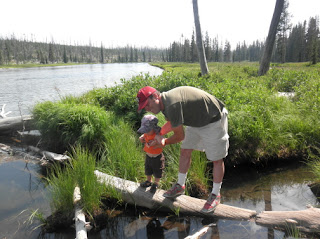 A few feet away, we found another log ride in the forest. Nature sure knows how to have fun!


On our way back to the hotel, we passed the Grand Tetons from a distance. Just opening my eyes in this part of the country fills my soul.

From Jackson Hole, we flew to Sheridan, Wyoming. Ten years ago, JoanMarie and I moved to Sheridan so she could do her college internship. In those six months we formed friendships that fell right back into place the moment we returned. 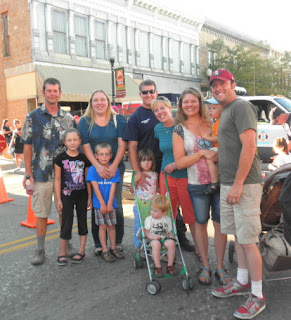 Sheridan has a 3rd Thursday festival where they block off several downtown streets once a month. The blocks are full of musicians, yummy food, vendors, and tractors! 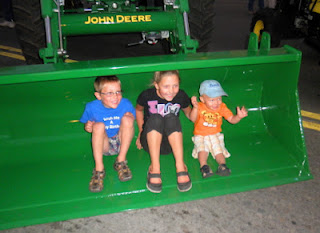 The Condos family took us on their boat to a cove on a lake where we had a beach all to ourselves. 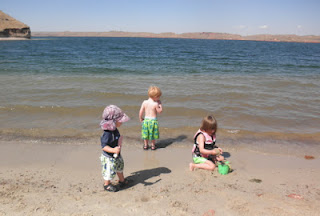 Klay is a firefighter, which came with perks Isaiah is still talking about. 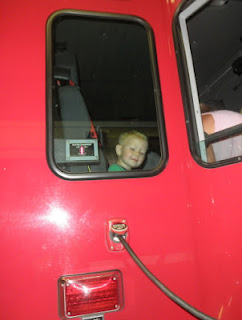 Ten years ago, when we left Sheridan, they were just beginning to plan the Whitney Commons. It's a beautiful area now, and it was great to see so many people enjoying it. 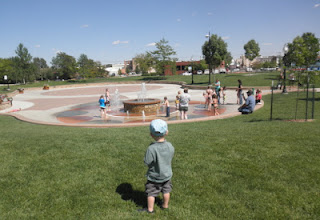 We stopped at Sheridan Stationery Books & Gallery, which was my first bookstore job. Here we are with Robby (the owner) behind a display of my books. This was to promote my signing later in the week. (And I couldn't leave without buying a couple books: Where the Rivers Run North and Images of America: Sheridan.) 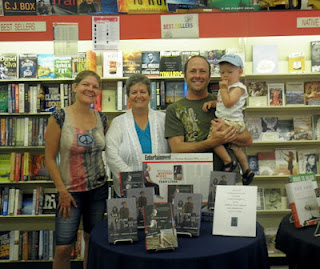 Preparing for my signing in Sheridan felt like coming full-circle. It was during my six-month stay that I came up with the idea for Thirteen Reasons Why. The parking lot of this gas station is where I scribbled several pages of notes that turned into the first several pages of the book. 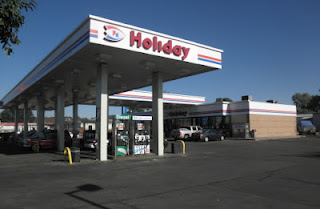 It was either at the end of 2002 or the beginning of 2003, but I do know it was snowing and the road was iced. It was very early in the morning, still dark, when the premise hit me. I couldn't drive any further or I knew I''d forget important details, so I pulled into a parking space, cranked my heater, and took notes as fast as I could.

When I got home later in the day, I wrote the first ten pages of what became my first published novel. The left and middle sections of the house below, attached to the two-story main house, are where JoanMarie and I lived. While someone is renting "our house" now, we remain friends with the person who owns the property. Stacie even invited us to stay in the main house with her for a night while in town. 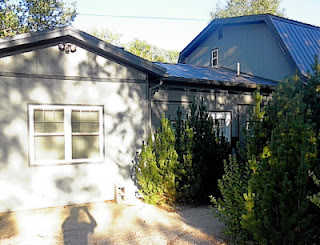 It was odd to picture myself sitting in that gas station, and then at the kitchen table, having no idea how that idea and those words would change my life. (And yes, I got the main character Clay's name from my Sheridan friend Klay.)

Stacie works at the Wyoming Girls School, so on our last day in town I gave a presentation there. The students asked some of the best questions, and made some of the best observations, of any school visit I've done. 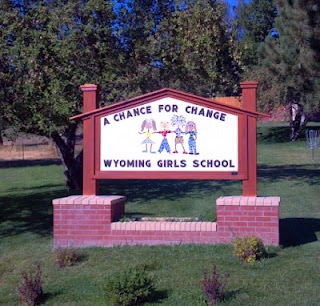 While I worked at Sheridan Stationery, I also worked part-time as an Assistant Children's Librarian (my first library job). I spoke at the Fulmer Public Library later that same day, and my one-time boss delayed a trip to the mountains to see me. 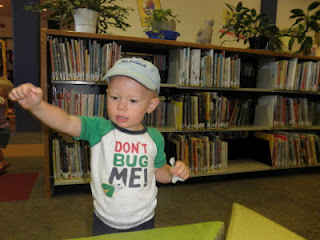 But Isaiah's favorite part of the week probably came later that afternoon. We took him to walk amongst the construction equipment parked a couple blocks from the library. Doesn't this look like he's standing in front of the right foot of a Transformer? 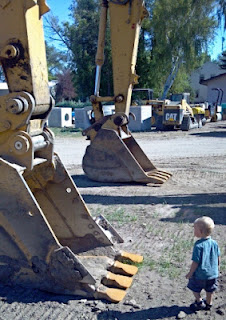 ﻿Thank you, Wyoming. You inspired me ten years ago. And you inspire me still.
Posted by Jay Asher at 3:17 PM

Aah! I'm so jealous that you got to meet Josh Holloway!!! And I'm glad you had a great trip! :)

Loved reading this--I love to see the roots and beginnings of book ideas. 27

That made me a little misty eyed. I love my home state and I'm glad you do, too. Sounds like an amazing trip.

I introduced 13 RW to my gf and she was blown away by how awesome it was!

Jay, So, glad you found success and found inspiration in Sheridan, Wyoming! I feel blessed to have met you and Joan Marie and that we have remained friends. Please visit me in Lake Havasu, AZ., in my new home. I would love to see you guys again! �� Stacie