Carolyn Mackler and I will be visiting 9 cities over the next 9 days to talk about The Future of Us. Hopefully you can make it to one of these stops!

Since we're starting on the East Coast, I caught a flight out of California Monday morning and arrived in New York in the evening. With only enough time for a late dinner, I went out for pizza with local designer, artist, writer, and activist, Asher Jay.

Yes, you read that right. Her name is Asher Jay! 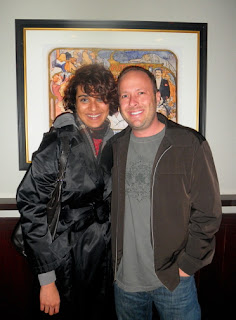 Asher Jay first heard about Jay Asher (that's me!) while shopping at a Duane Reade Drugstore. They weren't selling Thirteen Reasons Why at the store, but someone who'd just been there accidentally left his/her copy of the book on the counter, which is where Asher Jay noticed it.

My fingers are crossed that we'll run into some guy named Mackler Carolyn in California. That would bookend this tour beautifully!
Posted by Jay Asher at 5:00 AM

Jay Asher the author of Thirteen Reasons Why meets Asher Jay the artist who asks why daily. :D

What can I say?! When first name last meets last name first, it certainly leads to an interesting evening out in NY!

Btw here's my website, you asked me for it last evening (do NOT infringe on my tattoo) www.asherjay.com

How odd. I'm trying to figure out a way to meet you in Decatur/Atlanta, this Friday.