When we got to Austin in the evening, I took a cab downtown to meet up with a high school friend, and Carolyn went to bed. The next day, with a couple hours to act like tourists, Carolyn and I went out to lunch and browsed a few funky stores (Austin has a lot of funky stores). Then she returned to the hotel to take a quick nap and I took a tour of the Capitol.

Have you figured out which one of us values sleep more? 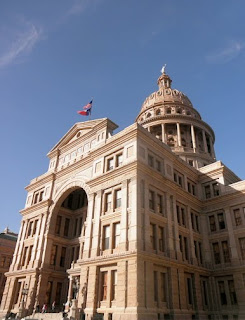 Austin has an amazing group of local writers and illustrators, many of whom I've met at various SCBWI conferences. It was wonderful to see Jessica Lee Anderson, Varian Johnson, Jeanette Larson, Cynthia Leitich Smith, Greg Leitich Smith, and Don Tate at BookPeople that evening. 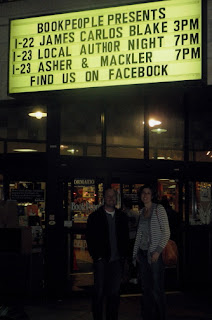 We were even given a Texas-sized donut (which I ate after Carolyn went to sleep)! 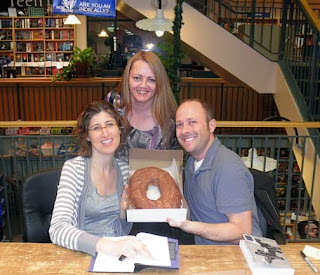 Early the next morning, we finally flew to my side of the United States, driving straight to a speaking engagement at Chino Hills High School. 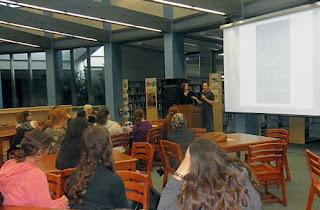 That was followed by a presentation at Ayala High School. 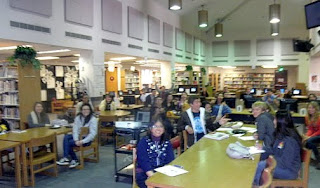 Then Carolyn took a quick nap (who would've thought!) while I watched TV and drank coffee. Yes, we each have our own ways of making sure we're sharp for evening bookstore events. Even though Carolyn and I have both been published for several years, we still get goosebumps when we walk into a store and see a nice display of our books, like the one at Mrs. Nelson's Toy & Book Shop. 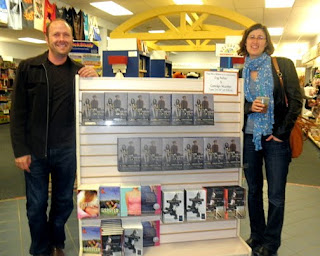 On our last day, Carolyn and I had brunch in Pasadena and reminisced about the past eight days. For two people who barely knew each other when we began writing The Future of Us, and had only hung out four times before this tour, we somehow managed to travel across the country for nine days without annoying each other once.

And then we both quickly knocked on wood because we still had a full day ahead of us.

First we spoke at Mayfield School. 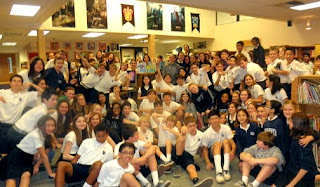 Then Burbank High School. When we were driving to B.H.S., we were told not to have any expectations. The school librarian had never brought an author to the school before, and the event was after school, so no one was required to be there. We could be speaking to just three people.

But the place was packed! 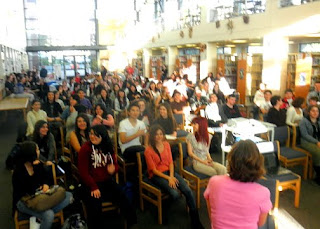 When Carolyn and I arrived at Once Upon A Time that evening, it was a mix of emotions. It was our last stop on the tour, and we were both ready to go home, but we were also feeling sad about parting, and sad that we won't be chatting with so many readers every day. 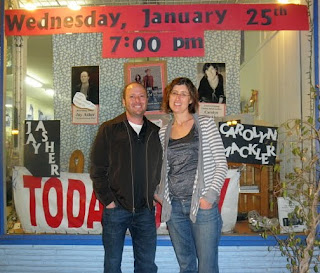 When I walked into the store, I immediately recognized my friend Danielle, even though I haven't seen her since...seventh grade! 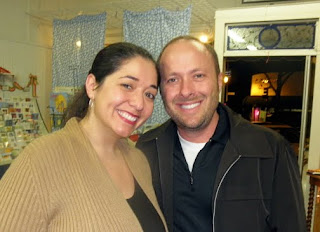 The audience included some of my favorite authors. Lisa Yee is circled in yellow, Ned Vizzini in blue, and that's either Ben Esch or Greg Pincus in green (they're both rather fuzzy). 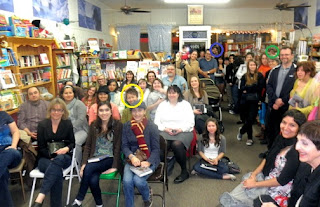 With the final speech given, and the final book signed, Carolyn and I wilted. But someone wanted us to pose for one final end-of-tour photo. 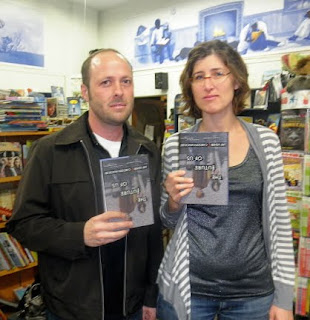 Aww! Thanks for the LOL with that final photo. ^_^ Glad you both get to go home and catch your breath now! I can't believe that it was over a week ago that I saw you both at your first stop on the tour - and now it's over! I know I said it already, but I'll say it again: I'm really happy that I got the chance to meet you both!

I agree. Ben and Greg are rather fuzzy fellows. Always great to see you, Jay!!!

I think everyone feels like that last picture at the end of a business trip--maybe the end of any trip?