"Such a parcel of rogues in a nation!"

The title of this post is the final line of Fareweel to a' Our Scottish Fame, a poem by poet Robert Burns. It seemed an appropriate note to begin this photojournal of my recent week in Scotland with my wife, mother-in-law, sister-in-law, and her boyfriend.

Here we are, arriving at the gate to our house in Inverness. 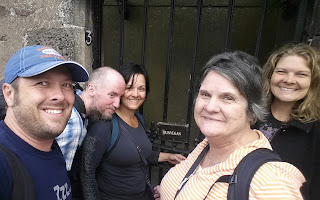 Inverness is an amazingly beautiful city to walk through, day or night. This is taken from the bridge over River Ness. 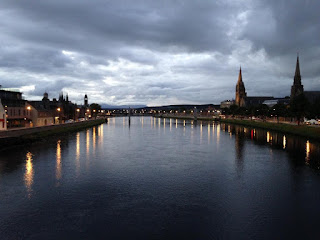 And check out this amazing used bookstore, Leakey's Bookshop! 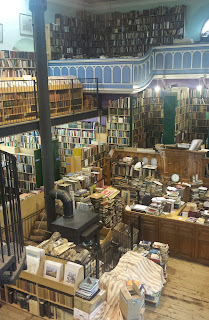 Growing up (meaning, from birth until now), I've been fascinated by monster legends. When I learned a trip to Loch Ness was on the itinerary, I nerded out! Any good book on the Loch Ness Monster will include a photo taken near Urquhart Castle. And now I was there! 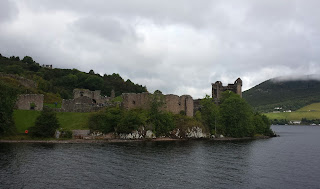 And on the Loch Ness by Jacobite boat tour, I saw him! 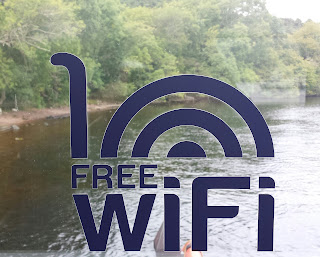 From the front window at our house, I did some editing of an upcoming book while looking out at a castle. It was an inspirational and magical view. In fact, another writer wrote a fairly popular seven-part children's book series in Scotland. And, for at least a few of those books, she wrote them while looking out at another castle. But more on that later! Here was my view. 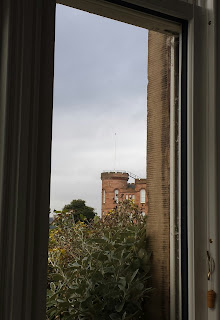 We then hopped a train to Pitlochry and hiked to the smallest distillery in Scotland. I'm not a big fan of alcoholic drinks, especially alcoholic drinks that taste like alcohol...(shudder)...but I love the history behind things that other people are connoisseurs of. The Edradour Distillery had a great tour, and the free sample they gave while describing the distillery's background made my face and body go like this: shudder! 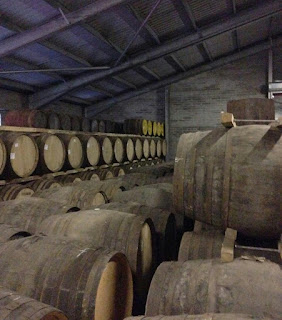 And here's a cool group shot on a rare sunny day. 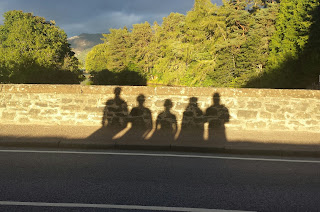 We had something called "high tea" at Culloden House, which is a beautiful place with a beautiful walled garden. I drank my tea with...wait... I just realized I ordered coffee and drank coffee at a high tea. That's awesome! (I'm such an American.) Anyway, I drank my coffee with my pinkie raised, which felt utterly appropriate. 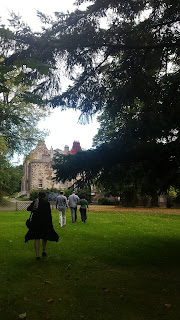 The Culloden House had a cool, detailed chess board that displayed the long battle between the Scottish and British, which is talked about everywhere. I'm not a big fan of battles and wars, but sometimes they provide the inspiration for really cool, detailed gameboards.

We stopped by the Clava Cairns for a drizzly stroll through the prehistoric cemetery. At least, that's what archaeologists assume it was. You see, it's prehistory, which means the people back then didn't think tourists would care about what in the world they were doing with all those stones. But we're pretty sure it's a cemetery. Or something ceremonial. When you find a pile of prehistoric rocks, it's probably one of those two things. And it's always cool to look at! 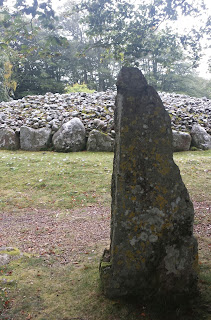 The next few days were spent in Edinburgh. If you're a frequenter to my blog, you know that I often take haunted history walking tours when I visit cities. Adam, JoanMarie, and I went on the Cadies and Witchery Tour, which was one of the most entertaining tours I've taken. Not only was the guide a great storyteller of dark Edinburgh history, they periodically had another cast member appear in various guises to add to the craziness. 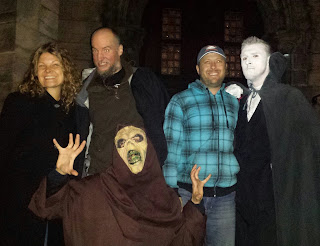 Another incredible walking tour was the Literary Pub Tour. They have two cast members, Clart and McBrain. Clart is fascinated by the debauchery of Edinburgh's literary superstars, and McBrain is a "tourist" who would like to clean up the story a bit. We roamed the city, stopping in several pubs for a break, which for most people meant a drink or two. 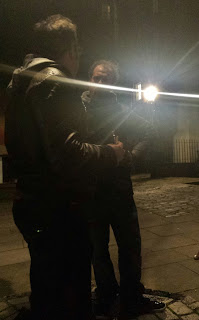 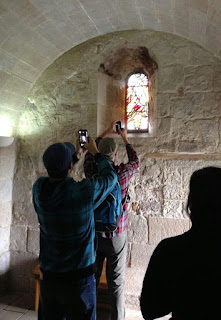 Previously, I mentioned a writer who wrote some fairly successful books in Scotland, which was inspired by many places around Scotland. The first book was written in a coffee house which later became a Chinese buffet and is now a cafe. But she wrote the next few books in the back room of a cafe that's still there, The Elephant House. I'm speaking, of course, about J.K. Rowling and the phenomenon known as Harry Potter. 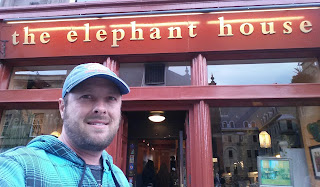 Of course, I had to eat a meal in that back room, which overlooks Edinburgh Castle. Talk about inspirational! 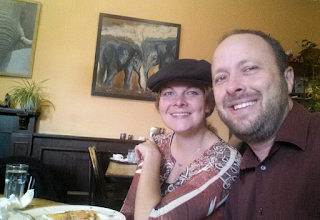 JoanMarie went into the ladies' room, where fans leave messages, and I'm just going to hope and assume the owners are okay with that. 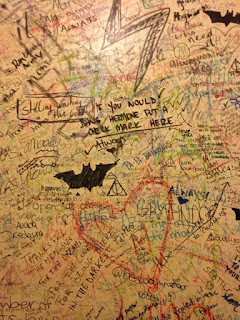 One more tour on our Scotland trip...The Potter Trail! Another wonderful and enthusiastic guide took us to places related to the series. Ms. Rowling took many of the names for her characters in Grayfriars Kirkyard (a.k.a. a cemetery). For example, the man known as "Scotland's worst poet" was William McGonnegal. Ms. Rowling would sit at a bench beside this grave and brainstorm. creating characters such as Minerva McGonagall. 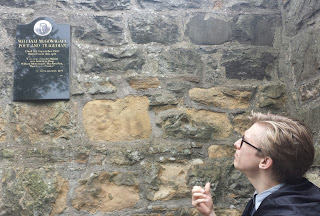 Since I was editing a book on this trip, in such an important literary place, I did some name-taking from Grayfriars, as well. Beside the grave of Scotland's worst poet is one for a woman with a first name that matches a character in my book. I didn't originally give my character a last name, but now she has one!

Right behind the wall where that bench used to be is George Heriot's School, which was the inspiration for Hogwarts. Students at this real school are actually divided into four houses! See? Write what you know! 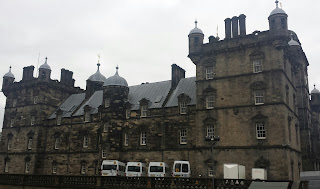 Also in the kirkyard are the graves of father and son, Thomas Riddell, changed to Thomas Riddle for anagram's sake in the series. (All these inspirations have been confirmed by Ms. Rowling herself.) And yes, this is me pointing a magic wand handed out by the guide toward the Riddell tombstone. 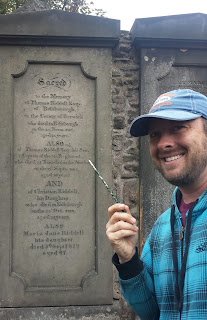 The tour ended above Victoria Street, which may look to you a lot like Diagon Alley. 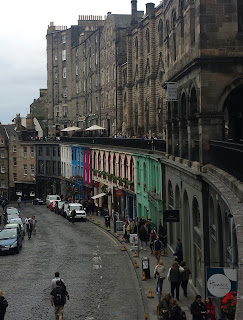 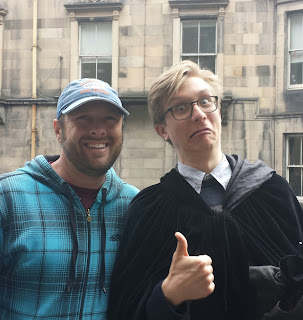 After all of this witchcraft and wizardry and pub crawling and haunted history, we took in a church service at the beautiful St. Giles' Cathedral. 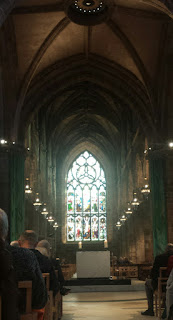 Outside, we finally saw and heard a kilt-wearing bagpiper! 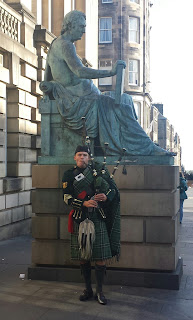 Before heading home, I noticed the bookshelves at the bed-and-breakfast where we stayed had been altered a bit from the day we arrived. A book was conveniently placed face-out near the table where we ate breakfast. 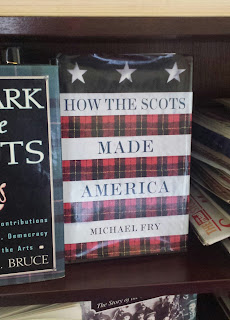 Fareweel to a' our Scottish fame,
Fareweel our ancient glory;
Fareweel ev'n to the Scottish name,
Sae fam'd in martial story.
Now Sark rins over Solway sands,
An' Tweed rins to the ocean,
To mark where England's province stands-
Such a parcel of rogues in a nation!

What force or guile could not subdue,
Thro' many warlike ages,
Is wrought now by a coward few,
For hireling traitor's wages.
The English steel we could disdain,
Secure in valour's station;
But English gold has been our bane -
Such a parcel of rogues in a nation!

O would, ere I had seen the day
That Treason thus could sell us,
My auld grey head had lien in clay,
Wi' Bruce and loyal Wallace!
But pith and power, till my last hour,
I'll mak this declaration;
We're bought and sold for English gold-
Such a parcel of rogues in a nation!