It's All Write in Virginia

Late last week, I flew to a speaking engagement in Virginia. Usually, my first flight leaves before the sun comes up, but this time I left late enough to see what my hometown looks like from the air. 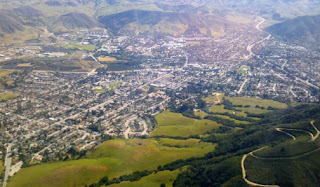 My first event had me speaking at a juvenile detention center. This is the second time I've spoken at a detention center, and they were both wonderful experiences. A lot of what those teens have been through is much worse than most of what Hannah experiences in Thirteen Reasons Why. Sometimes, they've done things worse than most of what happens in that book. But their desire to discuss that book and understand the characters, as well as share their personal experiences with me, made the entire trip worthwhile.

But there was still more!

I then spoke to a group of students at Park View High School in their school library. It was hard not to look down and smile whenever I walked by this display. 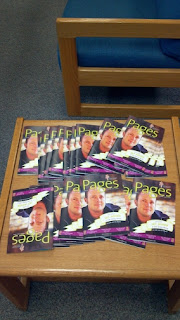 Then I spoke at the public library in Stone Ridge. This library has only been open since February, and it is beautiful! Here's one side of the audience who turned up for the free pizza (and to meet me...I hope).

One guy drove five hours to be there, and if you look through the window, you'll see that it was pouring outside. And that makes him extra awesome! 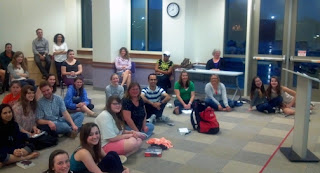 Something I'm starting to do more of, since some people own my books digitally, is to sign books that I didn't write. So if I'm ever in your town, feel free to bring along my book...or anyone else's book. 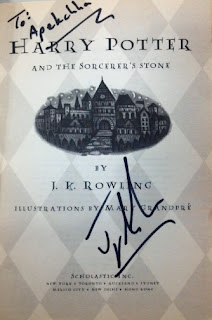 The next day, I handed out the awards for the It's All Write student writing contest. Awards were handed out in middle school and high school categories. The names and titles on these displays list all of the entries. 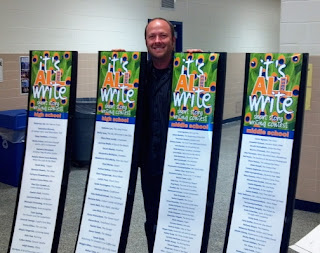 Linda, the organizer of my trip to Virginia, lives near Oak Hill, the home built for James Monroe (fifth President of the United States). The home remains privately owned, but since Linda is friends with the owner, I got a private tour of the house and its beautiful surroundings. 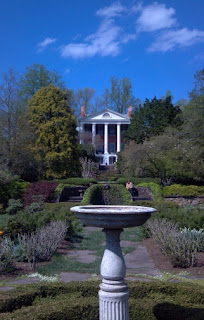 Virginia, you are beautiful. Thanks for being a great host! 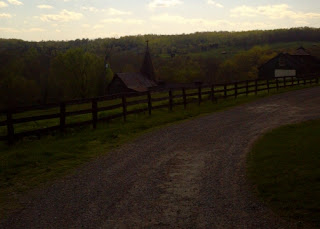